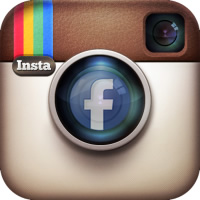 On April 10th, Facebook announced that it acquired the newly emerging Instagram. If you don't know what Instagram actually is, you're not alone. Instagram is a social media platform completely focused on sharing individual photos. You can snap a picture, apply a stylistic filter in Instagram, and instantly share it with friends and family. Also, you can easily share your photos to Facebook, Twitter and Tumblr as well. Best of all, you can do all this directly on your iPhone or Android phone using the Instagram app.

Facebook CEO Mark Zuckerberg announced the acquisition of Instagram for roughly $1 billion, consisting of cash and stock. Mr. Zuckerberg also claimed that it would be continuing to build the Instagram app independently rather than integrating with Facebook.

Only time will tell where the acquisition will take Instagram and what benefits will it ultimately bring to Facebook. In the meantime, do not be surprised if you see a sepia-tone picture of Instagram's founders, Kevin Systrom (CEO) and Mike Krieger sitting on a $1 billion pile of cash.

Disclaimer: Instagram and Facebook logos used in the above compilation are trademarked and property of their respective owners.

Igniting Business fulfills this need by providing powerful small business solutions at affordable rates. Our team of web design, SEO, and marketing specialists are here to make your job easier and help your small business succeed. We encourage you to contact us to learn more or to set up a free consultation.

So Your Small Business is on Facebook, Now What?

Request Meeting
Free Monthly Tips Delivered to Your Inbox
Get FREE Marketing, Web Design, and SEO Tips
Sign Up for Free I'm Not Interested
You can unsubscribe at any time, and we don't sell your information.